Who wants to be spoilt this Christmas ????

We are giving a family of 4 the chance to spend a 2 night luxury Christmas break with us.

Arrive on Christmas Eve and enjoy our Festive Afternoon Tea, later we will be singing carols around the Christmas Tree.

Join us for a delicious Christmas Eve dinner & entertainment before popping some mince pies under the tree for Father Christmas.

Christmas Morning enjoy our fabulous breakfast and a visit from our special guest.

Join us in the ballroom for the Queens speech & Christmas cake

Enjoy a walk on our fabulous coast or take a dip in our beautiful pool.

If you still have room, we have a glorious buffet in the evening in our chandelier dining room.

Wake up relaxed on Boxing Day and enjoy another award winning breakfast, take a dip in our pool before its time to say Goodbye.

So how do I win I hear you say! Easy….we would love for you to design our Atlantic Hotel 2020 Christmas card, anyone of any age can enter

Entries can be posted on our Facebook page from 1st June

Do not worry if you are already booked you can still join in and win.

We can’t wait to see what you come up with, so get drawing!

The winner will be picked at random by the Atlantic Hotel on 1st October 2020.

Facebook does not promote this competition in any way and will not be liable for any prize value.

Prizes cannot be refunded or exchanged for any other cash value. Prize cannot be used in conjunction with any other offer.

Let’s get creative this Christmas, and what better way than to put the spirit in Christmas spirit!

Christmas cocktails are a great way to get the party started so our AA Rosette awarded Silks Bistro’s mixologist decided to concoct a few to help you celebrate in style!

Just mulled that one over 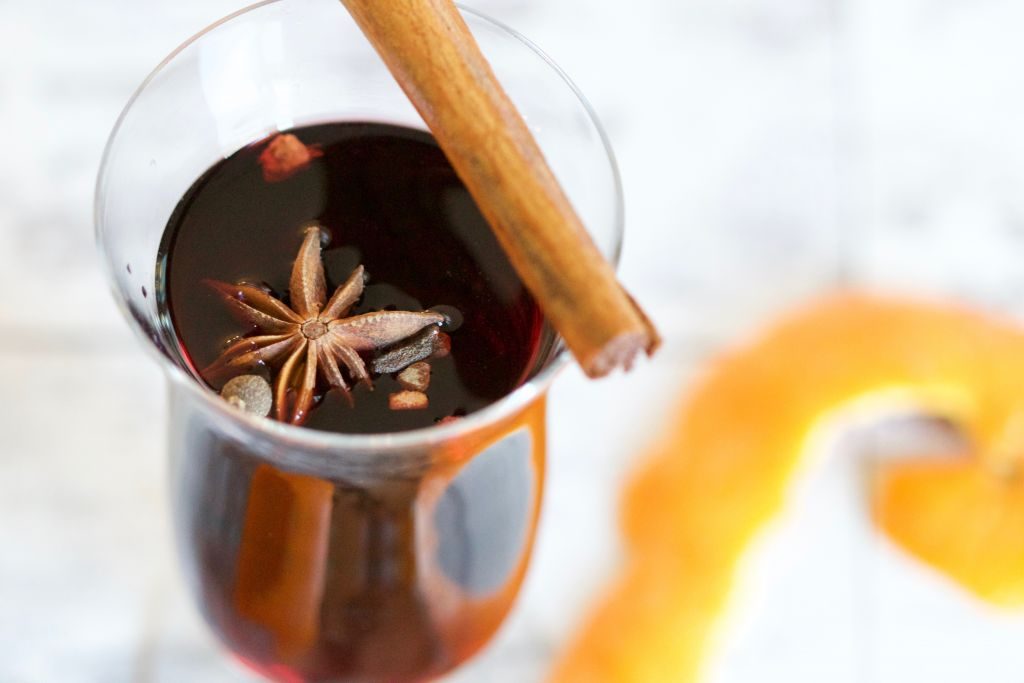 Warm the soul with this traditional twist of Christmas!

What you’ll need is:

Pour a glass or two of delicious mulled wine (warm or cold) with a sprinkle of cinnamon, muscovado sugar & Cointreau. Then add a little squeeze of clementine orange and lemon juice. To finish, top with a dried clementine.

Now not everyone can be a cocktail connoisseur and a quick spin on things is always handy.

What you’ll need is:

Chill your martini glass, while you make your delicious cocktail. Brew your espresso and add a sprinkle of cinnamon. Add plenty of ice to your shaker, add your vodka, sugar syrup, cinnamon-infused espresso and coffee liqueur.

Now, to make the best espresso martini, a little extra shake is required. In order to create a smooth crema on your martini, shake the shaker a few more seconds than you usually would with another cocktail. This ensures the cocktail separates into smooth but distinct layers.

Dust with cinnamon and add a few espresso beans to decorate. If you prefer, substitute cinnamon for chocolate. A sprinkle of choco instead of cinnamon works just as well. Why not add chocolate sauce to the inside of the glass!

You are a cocktail connoisseur now!

Making drinks for the family may mean a pitcher or two for a quick top up as your guests arrive. This recipe makes four so double or reduce if needed.

What you will need:

Put the cranberry juice in a small saucepan with a sprig of rosemary. Bring to the boil and reduce for a few mins until syrupy. Leave to cool, then chill until ready to use.

Fill your champagne flutes with Prosecco about four fifths of the way. Top up with your homemade syrup and watch it infuse like magic! 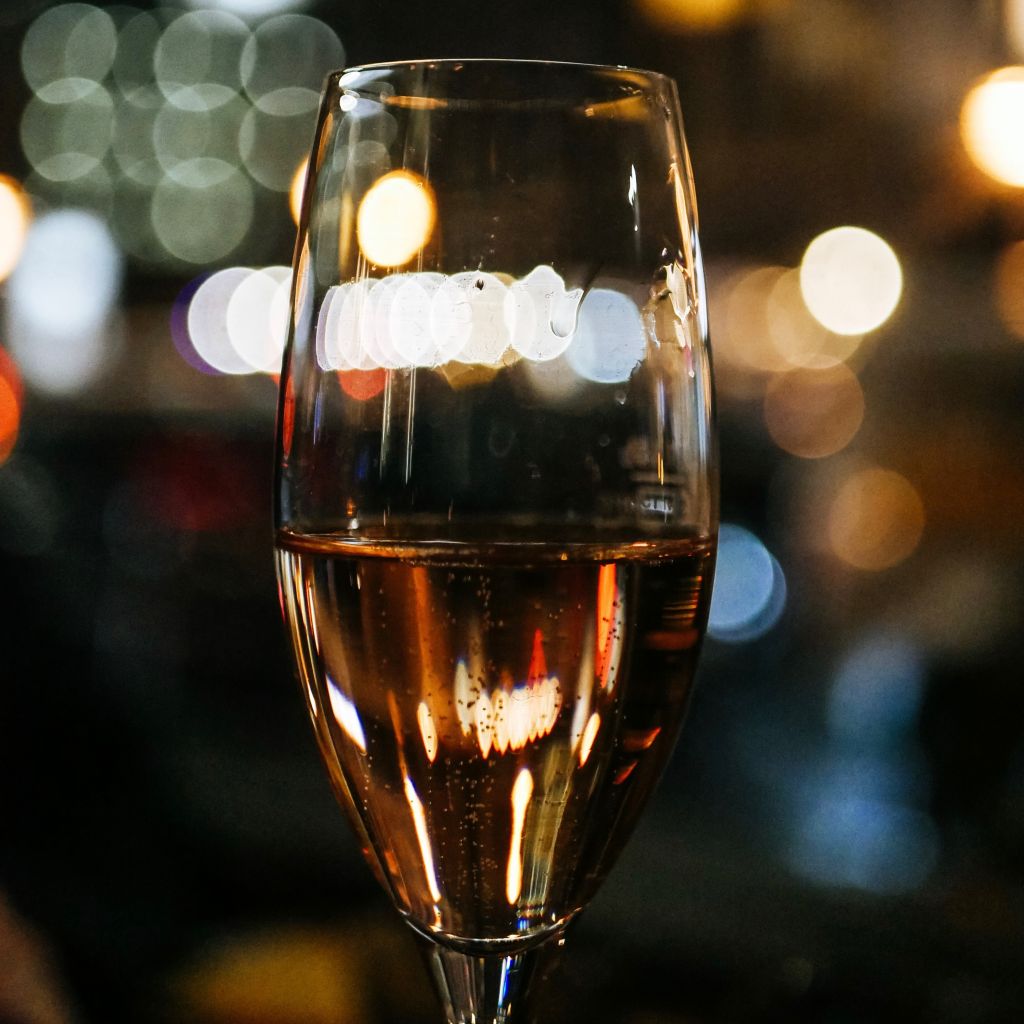 Just a few delicious drinks to get you in the party spirit this December. 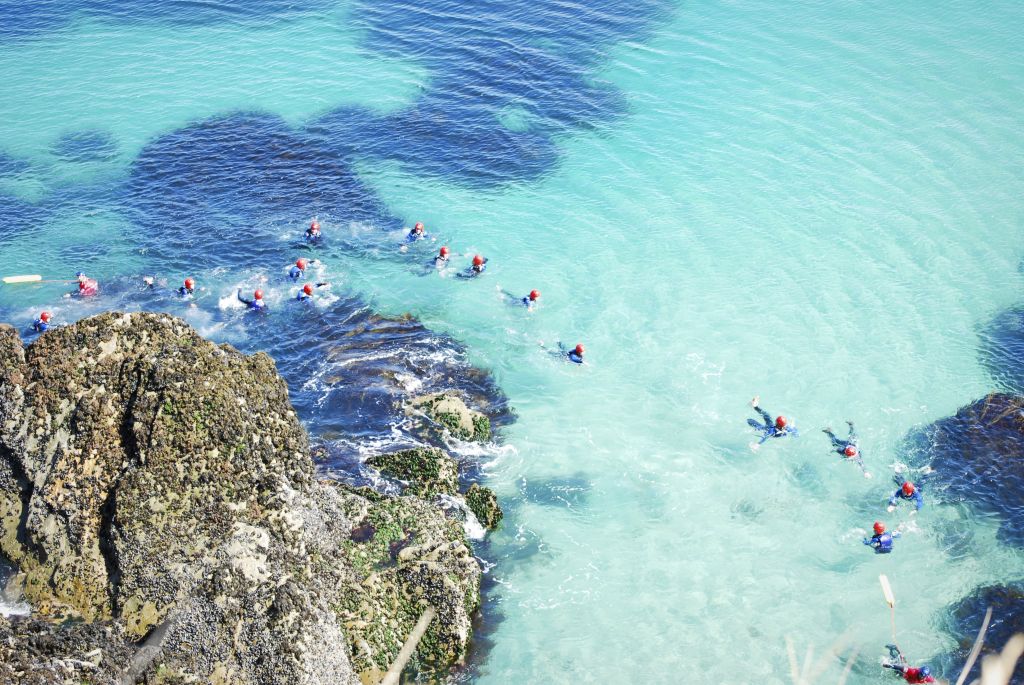 As the Summer holidays end, locals and holiday makers in the know welcome September in Cornwall, with the crowds from July and August gone, the sea temperature at its warmest and our RNLI still on duty, September is one of the best times of the year to get out on the water.

Here are The Atlantic Hotel’s ideas on how to experience the Cornish coast at its best….

Newquay Sea Safaris run trips throughout the Autumn and Winter and leaves old historical Newquay harbour, down the hill from The Atlantic Hotel, cruising off along the rugged Cornish coastline, stopping to view birds, marine wildlife and crabbing boats whilst learning about Newquay’s Maritime History and the plight of our marine habitat.

At Seal Cove watch the seals in their natural environment before speeding out to deeper ocean for more off shore wildlife encounters to complete your Thrilling Adventure!… Spot for dolphins, Basking sharks, Sunfish, Harbour Porpoise and a huge array of sea birds or watch the Skipper haul his lobster pots. Every day experiences different encounters and sea states so this is a trip that will delight every time. 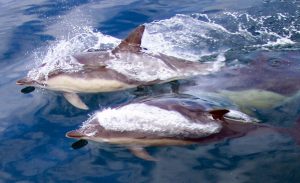 Newquay Activity Centre, running for over 21 years offers an array of watersports activities just a short walk from The Atlantic Hotel offer a once in a lifetime experience, with Stand Up Paddle boarding, Super Stand Up Paddle Boarding and Coasteering, you can try something new and enjoy a fantastic day in the water. https://newquayactivitycentre.co.uk 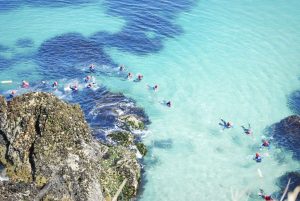 The north Cornish coast also offers superb sailing opportunities. Newquay Sailing Club holds regular handicap racing in the bay, times varying according to tides. Dinghy-owners may bring their boats, become associate members, compete in the racing and use the Clubhouse.

Newquay is known as the home of British Surfing, hosting many World surfing events throughout the year September sees a bigger swell- perfect for pros, intermediates and learner surfers. The Atlantic Hotel’s approved surf school Escape ran by Pro Surfer and surf guru Mike Young and his team offer a range of lessons for all ages that will get you up and riding. You can book a luxury surf break here https://atlantichotelnewquay.co.uk/specialbreaks/luxury-surf-breaks/

After a day on the water, coming back to 4 star luxury is just what the doctor ordered, chill out in our fantastic ocean view leisure facilities, enjoy a drink on our terrace (September sunsets are spectacular!) and enjoy a stunning dinner in our AA Rosette Restaurant, Silks Bistro and Champagne Bar before your sleepy head hits our fluffy pillows.

Give our friendly reception team a call on 01637 872244 and book your September break by the sea. 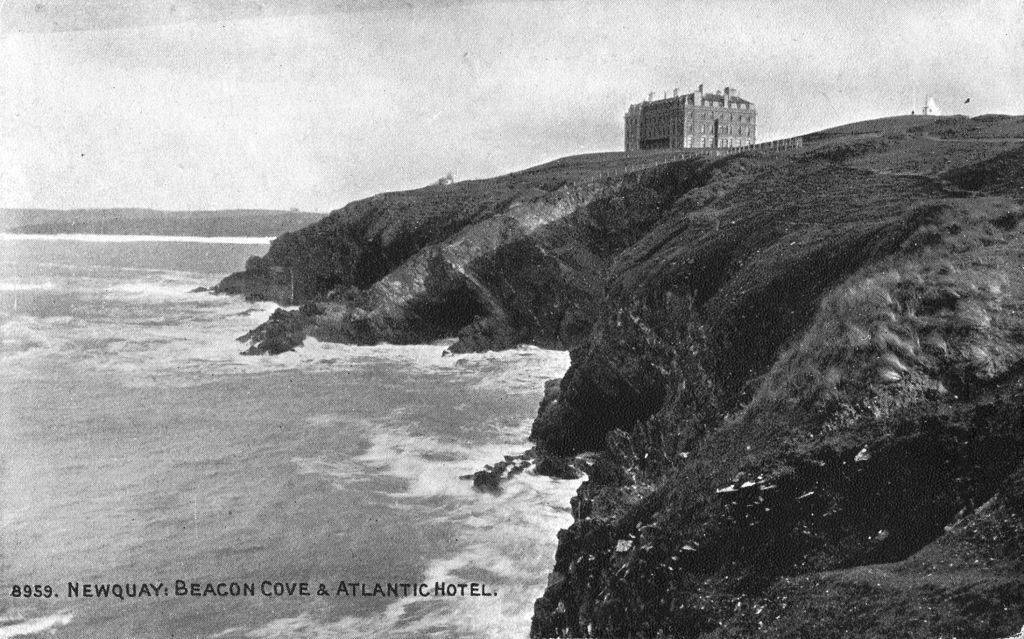 This March The Atlantic Hotel will celebrate 125 years. Our iconic Hotel has been part of Newquay’s skyline since 1892. Read on to discover the  history behind our Hotel, including opening woes, patriotic duties in WWII,  and our part in The Beatles “Magical Mystery Tour”

The Atlantic Hotel’s Grand Opening in 1892

After The Cornish Hotel Company acquired a lease for 10 acres of The Beacon, 1890, the Council approved the development due to the decline of the pilchard fishing industry, and recognising that there was a need to expand the holiday trade, and bring money in Newquay. Designed by architect Silvanus Trevail, (lovely Cornish name!) the Atlantic Hotel was one of the first purpose built, luxury hotels in Newquay, containing more than 100 apartments. The grand opening in 1892 unfortunately coincided with a vicious outbreak of Scarlet Fever in the town, which reportedly saw visitor steer clear. The hotel worked hard to build it’s reputation, and it did not take long for the iconic Hotel to become the jewel in Newquay’s tourism crown.

The Atlantic Hotel was turned into a hospital during WWII helping injured soldiers recover back to health. Once the patients were ambulant, they wore bright blue uniforms with white shirts and red ties, and were allowed into the town. The hotel was re-opened later in the year, following some alterations. 1935 saw the cocktail lounge decorated and furnished by the world famous Harrods of London in 1935, and the re-opening saw over 400 guests attend.

The Fab Four on the Magical Mystery Tour

Famous faces have often enjoyed a stay at The Atlantic Hotel, including the Beatles in September 1967, the fab four stayed for 3 nights whilst filming footage for the Magical Mystery Tour. Reports are that The Beatles created the cover for their album, Sergeant Pepper’s Lonely Hearts Club Band from the Atlantic Hotel.

The Atlantic Hotel was bought by the current owners, the  (Late) Mr Cobley, Mrs Cobley, and their daughters, Lorraine and Claire in 1986. The family  have invested in numerous extensions and alterations over the years to present, from extending the ballroom and creating a sun terrace and gazebo, to most recently, the complete refurbishment of their indoor leisure facilities, including sea view indoor pool, hot tub and steam room, and the addition of The Ocean View Treatment Room, now open to non-residents. The four star hotel has 57 Sea View bedrooms, with a mix of suites, superior rooms, and classic doubles. The Art-Deco theme, and panoramic views certainly ensure that guests will enjoy real luxury from the moment they arrive.

Hard work, commitment and quality of produce saw the resident restaurant, Silks Bistro & Champagne Bar awarded the first AA Rosette in Newquay in 2014. The awards have kept coming, including Taste West Awards, and Trip Advisor Certificate of Excellence. The Atlantic Hotel was also awarded “Modern Luxury Hotel of the Year 2016” by The Luxury Travel Guide. There are many exciting plans ahead, but one thing will remain: the warm welcome, luxurious surroundings, and a commitment to provide locals and holiday makers alike with luxury surroundings, and first class service. 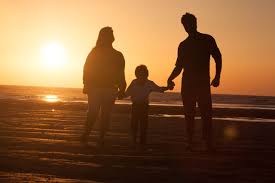 It’s Half Term in February! We love Half Term as it’s a time when families visit The Atlantic for holidays and to make it even more fantastic, we offer kids for free for the Half Term, hoorah!

END_OF_DOCUMENT_TOKEN_TO_BE_REPLACED

The Atlantic Hotel likes to pay attention to the finer details, from our striking cream grand piano, to our carefully selected Champagne display; we pay extra special attention to our décor, to make sure our guests feel like VIP’s. END_OF_DOCUMENT_TOKEN_TO_BE_REPLACED 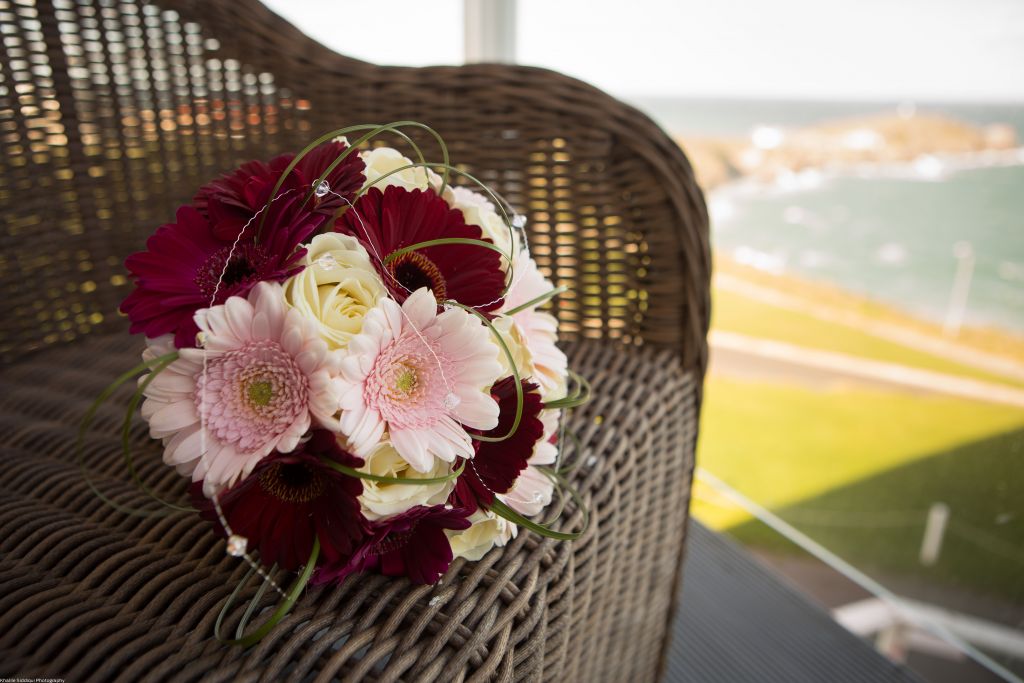 Spring time is one of the best points of the year, all the withered plants are leaving, making way for daffodils and rich greenery. We’re here to tell you why we really love a spring wedding, although we’re pretty certain the question should be, why wouldn’t we? END_OF_DOCUMENT_TOKEN_TO_BE_REPLACED

Our fabulous Silks Bistro and Champagne Bar is one of the only rosette awarded restaurants in the Newquay area, meaning you’re certain to experience delectable taste sensations every time you visit… END_OF_DOCUMENT_TOKEN_TO_BE_REPLACED

Just steps away from the Atlantic Hotel sits Huer’s Hut on Newquay’s Towan Head. The building in place now dates back to the mid 19th century, but it’s expected that the history of the structure dates back much further to the 14th century.